The "How To" Web - El Cocinero Fiel

Whenever Internet theorists want an example of how the Internet changes the world and makes possible things we never could have had before, Exhibit A is almost always Wikipedia. Now, I also think Wikipedia as a social phenomenon and as an information resource is pretty incredible. But, often I think this talk drifts into a kind of Wikipedia-exceptionalism. Even when one sweeps in free software as another form of peer production, I think the discussion about building an "it" misses what I think is the more fundamental human urge to teach one another.

It is a strong impulse learned in the nuclear family to teach others so that they may grow. In my view, it is this impulse that leads folks to contribute to Wikipedia, to essentially provide free software support or customer service to producers through user forums, and to share practical tips and knowledge through all manner of blogs. Taken together, all of this advice and sharing of practical knowledge forms the "How To" web.

(Of course, sometime this exercise comes off the web. At Campus Party 2009, Patricio Lorente of the Wikimedia Foundation taught a group of astronomers f2f at Campus Party 2009 how to create a Wikipedia entry.)

A case in point is the growth of video blogs or posts to YouTube that provide all manner of instructional video. While in Columbia, I had the good fortune to get to know Txaber Allue Marti, otherwise known in the Spanish-speaking world as El Cocinero Fiel (the funky cook). Living in Spain, but increasingly engaged in gastronomic tourism, Txaber's video blog is essentially an interactive cooking show hosted on YouTube. An important part of his success is that he interacts with his audience through the comment feature. He also posts his blog under a Creative Commons license.

Having been an occasional viewer of television cooking shows, I find Txaber's videos refreshingly direct and fun. In part, he makes the food the star of the videos, not the cook.

Below is Txaber, Carolina Botero (Creative Commons Colombia), and Patricio. 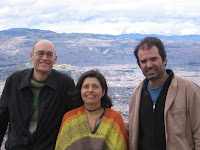 Hi! Thanks! About cooking and knowledge, from Nassim Nicholas TAleb : Ideas spread because, alas, they have for carriers self-serving agents who are interested in them, and interested in distorting them in the replication process. You do not make a cake for the sake of merely replicating a recipe—you try to make your own cake, using ideas from others to improve it. We humans are not photocopiers. So contagious mental categories must be those in which we are prepared to believe, perhaps even programmed to believe. To be contagious, a mental category must agree with our nature.

Its Colombia not Columbia