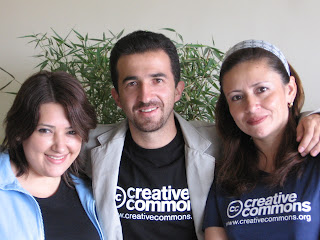 On Tuesday, April 22, 2008, I spoke at the launch of Creative Commons Ecuador, which was held in the context of a conference on measuring quality in distance education hosted by the Universidad Technica Particular de Loja. It was a great event attended by about 300 people. Video is here.

There's great enthusiasm for CC here, and the project team, led by Dr. Juan Jose Puertas, has done a great job. In the photo, Juan Jose is accompanied by the other team members, Veronica Granda Gonzalez (left) and Dra. Patricia Pacheco, all from the UTPL legal department. Carlos Correa Loyola, Director of the IT program, also provided support as did the Chancellor and Rector of the university, Fr. Luis Miguel Romero.

The university also announced its "Open UTPL" program, through which it will be putting course materials online under a CC Attribution Non Commercial Share Alike 3.0 license.

Ecuador joins an active Creative Commons community in Latin America. Check this out.

Felicidades!
Posted by Michael W. Carroll at 8:55 AM